Is this really the version you are looking for? Kentico 8.1 documentation is no longer updated. Use the switch in the header to choose your Kentico Xperience version.

This page describes the steps of the Kentico Active Import Utility wizard for importing users and roles from Active Directory.

You can launch this utility:

Choose if you want to create a new import profile or use an existing XML profile. If you select an existing profile, values will be pre-filled in the following steps based on the profile settings.

Specify the target Kentico database, where the users and roles will be imported:

Click Establish connection and enter the Database name of the target database.

We recommend testing the specified connection by clicking Test connection. 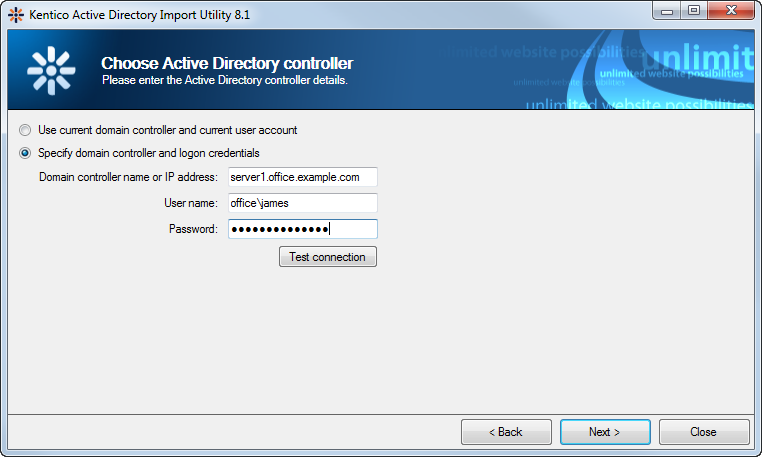 Configure the general settings of the import process:

You can also adjust the behavior of the import by enabling or disabling the following options:

If you do not choose any site in this step, the rest of the wizard will leave out steps related to the import of roles (groups). This happens because it is currently not possible to import roles from AD into Kentico as global objects and they must be assigned to a specific site.

Select roles and users that will be imported. It is possible to adjust the settings made here in the following two steps.

On the left, you can see all groups (roles) found on the source server. If you select a group, its members are displayed in the list on the right. You can define which users and roles will be imported using the appropriate check-boxes.

By right-clicking a group, you can perform the following actions:

All users in a group or all groups can be selected or deselected by clicking Select all or Deselect all. 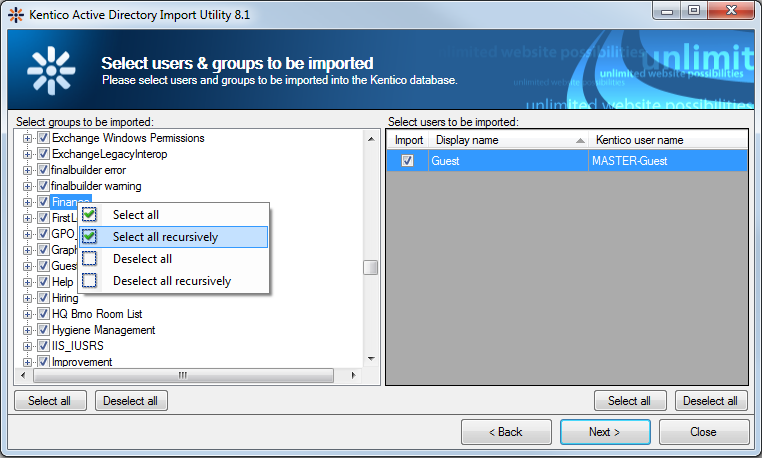 Step 7 – Adjust users to be imported

Adjust the users to be imported using the check boxes. Users are selected according to the settings made in the previous step. You can filter the listed users by Display name and User name. 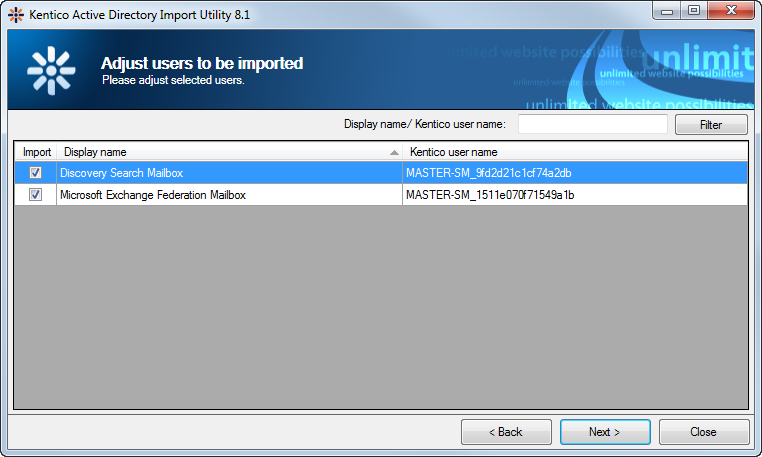 Step 8 – Adjust groups to be imported

Adjust the groups (roles) to be imported using the check boxes. You can filter the listed groups by Group name using the filter above the list.

Select the Kentico roles to which the imported users will be assigned. If you are importing to multiple sites, first choose the site whose roles should be displayed using the Site selector.

You have configured your import profile.

You can now execute the import immediately, save the profile into a file or perform both of these actions (enable the Import now and Save import profile to file check boxes respectively).

You need to create an import profile if you plan to run the AD Import Utility from the command line.

The last step displays an import log, showing the progress of the import process. When the import finishes, click Finish to close the wizard.

We use small cookies to improve your browsing experience and to analyze traffic. To process the analytical cookies, we need your consent.
You may revoke your consent on the Cookies Policy page or in your browser at any time.