Is this really the version you are looking for? Kentico 8 documentation is no longer updated. Use the switch in the header to choose your Kentico Xperience version.

You can launch Kentico Import Toolkit from the Windows Start menu -> All programs -> Kentico 8.0 -> Utilities.

Choose if you want to create a new import session or use an existing import profile:

Choose the root folder of the project into which you want to import your data and select the check-box below the field.

By selecting the check-box, you confirm that you have performed a backup of your project, so that you can roll back any potential damage caused by the import.

Select the object type that will be used to store the imported data in Kentico.

- You can restrict which objects appear in the Objects and Object attachments lists by adding keys to the ImportToolkit.exe.config file as described in the Restricting the selection of objects section.

This drop-down list allows you to select a site to which the imported objects will be assigned.

Where applicable, you can also choose (global objects) from the drop-down list to import the data as global objects not bound to a specific website.

These radio buttons allow you to set the tool's behavior when it detects that some of the imported data already exist in Kentico. Existing objects can either be detected automatically (based on code name or GUID), or by a WHERE condition specified in Step 6 of the wizard:

Step 3 – Select source of the data

Specify the source of the imported data: 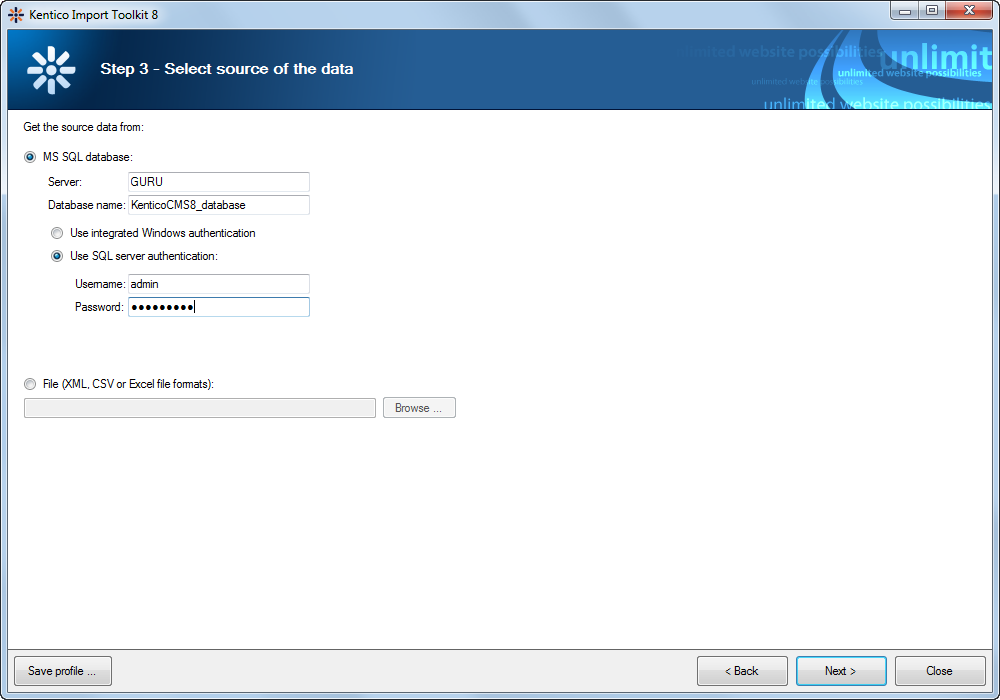 The appearance of this step depends on the type of data source selected in the previous step. Click the link to expand:

Choose a desired data source for the import: 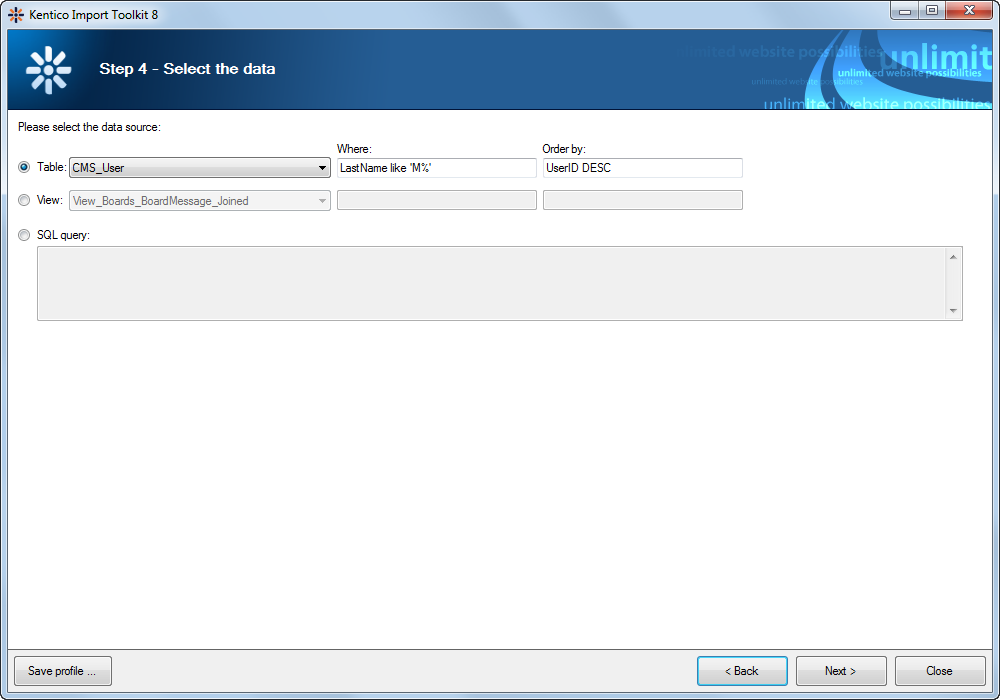 Using the Table name drop-down list, select which elements of the source XML file represent individual records to be imported. All its sub-elements will then be taken as individual data columns of the imported records. 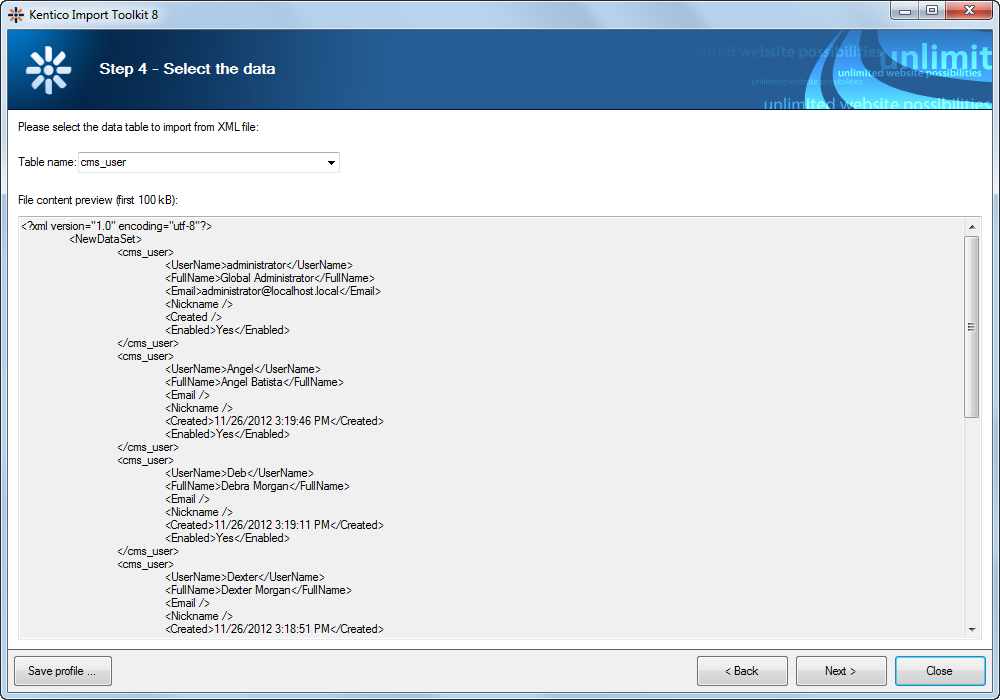 Choose which row and column of the file will be taken as the beginning of the heading row of the imported data. You can make the selection either by specifying the row and column in the Row and Column fields above the grid, or simply by clicking the respective cell in the grid.

In the Item separator filed specify, which character is used in the source CSV file as a separator between values in individual rows. A comma is used most typically, but you may come across CSV files that use different item separators, e.g., semicolons.

Here you can check if you specified the source data correctly in the previous steps. 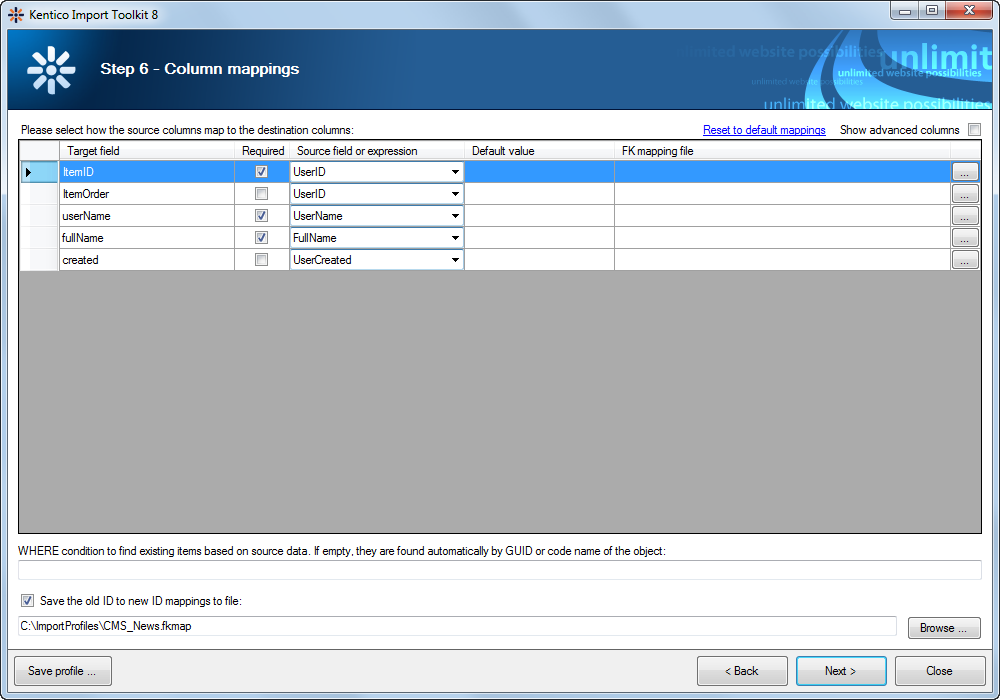 Depending on selected options in Step 2 of the wizard, you can see additional fields below the grid:

If you wish to use the import toolkit to add language versions to an existing node in the content tree, you have two options:

The #<target> query is used to select the NodeID of the document that should be updated from the target database.

The {%NodeAliasPath%} macro is resolved into the alias path of your document versions in the source data. Because all language versions of the same document share the same alias path, this allows you to find the appropriate NodeID in the target database.

Please note that the Import new and overwrite existing documents option must be selected in Step 2 of the wizard in order for this to work correctly.

You can also enable the Save the old ID to new ID mappings to file check-box. This enables you to save mappings of source ID columns to target ID columns into an .fkmap file that can be used during another session in the FK mapping file column above. The following example explains the use of the file:

You have a list of questions and a list of answers, where each answer is bound to a question with a foreign key. And you want to import both lists and preserve their bindings:

You can see a preview of the data as it will look when imported to the target. Before proceeding, choose how you want to import the data:

The utility displays a log, showing you the progress of the import.

If an error occurs during the import, e.g., when there are restricted characters in imported data, the utility displays an error dialog. The error message contained in the dialog explains the issue and provides you with the following options: 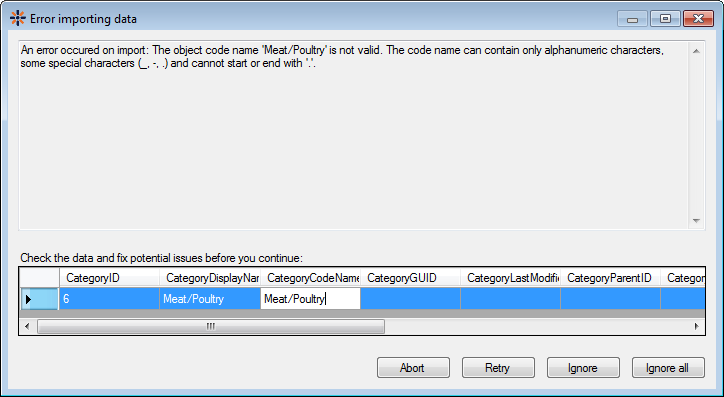 The final step informs you of the results of the import. Imported data should already be visible in Kentico at this point. You can perform the following actions:

Restricting the selection of objects

You can reduce the selection of objects offered in the drop-down lists in Step 2 of the Import Toolkit by adding optional keys to the ImportToolkit.exe.config file. You can find the configuration file in <Kentico installation folder>\Bin (typically C:\Program Files (x86)\Kentico\<version number>\Bin).

After selecting the Objects option from the Select data type to import drop down list, you can choose an imported object in the Import as section. You can restrict which objects appear in the Import as drop-down list depending on the selected radio buttons:

After selecting the Object attachments (metafiles) option from the Select data type to import drop-down list, you can restrict the objects that are available in the Attach to object type list:

We use small cookies to improve your browsing experience and to analyze traffic. To process the analytical cookies, we need your consent.
You may revoke your consent on the Cookies Policy page or in your browser at any time.